“Explosion! Eight injured and without shelter.”

Flash point is an appealing board game, where you take up the role of courageous firefighters and step into a burning building. Your goal is to lead everyone to safety before they get devoured by flames or crushed by falling debris.Interestingly, the game was funded through Kickstarter in 2011. An expansion was funded 7 days ago. 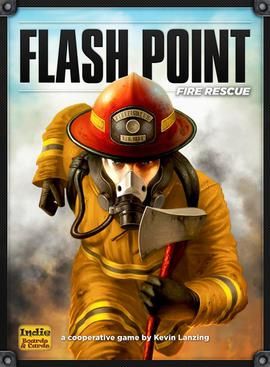 Flash Point is co-operative, meaning you and your friends work together, sharing victory or defeat. It has two sets of rules. The first one is simplified to the basics and a great starting point for casual gamers. It explains what tools and actions do the firesfighters have, how does the fire spread, and sends you directly into action.

Besides your own wit you only have some protective clothing and an axe. You rush into the house without delay, to get to the hapless victims before the fire does. And right here you encounter the biggest challenge in the game – planning your moves. Will you run directly toward a man in distress, ignoring the flame around, and try to get him out before it’s too late? The fire then might get completely out of control. Or will you rather proceed carefully, keeping the flames at bay? If you create sufficiently wide a way, someone of your teammates might drag the injured to safety. Because what’s worse than carrying an unconscious person, just to realize there no longer is a way back? A complete collapse of the damaged building, when you try to chop your way out through a wall, of course.

After each player’s move, the fire expands. Sometimes there’s just a bit of smoke, sometimes the ground is shaken by a violent explosion, killing everything in its wake. The game continues, until at least seven out of ten are rescued – meaning the players lose if at least four die, or the building breaks down.

“Fire in the family house: firefighter gets a Medal of Courage”

The second variant of Fire Rescue’s rules is targeted at the more experienced players. It has three degrees of difficulty, which substantially increase the game’s appeal. Each firefighter now specializes in one of eight possible ways; imaging technician is equipped with a thermal camera and can scout ahead. A medic can resuscitate the victim, but is less capable when dousing flames. The CAFS specialist is slower, but his powerful foam extinguisher leaves no traces of fire.

One more thing that makes the lives of firefighters easier is a powerful firetruck, capable of extinguishing whole rooms with a single torrent. Everything else plays against them. Compared to the easier variant, the victims now must be dragged to an ambulance, not just out of the building, all the while dangerous new hot spots emerge around them. Flare-ups can get out of hand pretty quickly, and we haven’t even mentioned the “improperly stored hazardous materials” yet.

An aside: Judging by the places where all the hazmats are found, an average day in the house must have looked like this:

“Daaddyyy, why is this gasoline canister in the bathroom?”

“Be quiet and turn the lights on, I think there’s a gas leak in the living room’s fireplace.”

“I can’t find the matches!”

“They’re in the bedroom of course, between the detergents and lighter fluid. Also bring the acetone over and clean the oven.”

Imagine the surprise, when suddenly everything bursts to flame.

“Catastrophe in the suburbs: fire caused by petrol stored in the boiler room”

For the low price the game costs, you’ll get dozens of well-made components; various tokens and cards made of thick cardboard, simple playing pieces, dice, and a two-sided board. One side is for easier games, the other for those times when you feel clever and don’t mind losing. :) The system for picking random coordinates with two dice rolls and marks on the board also works pretty well. 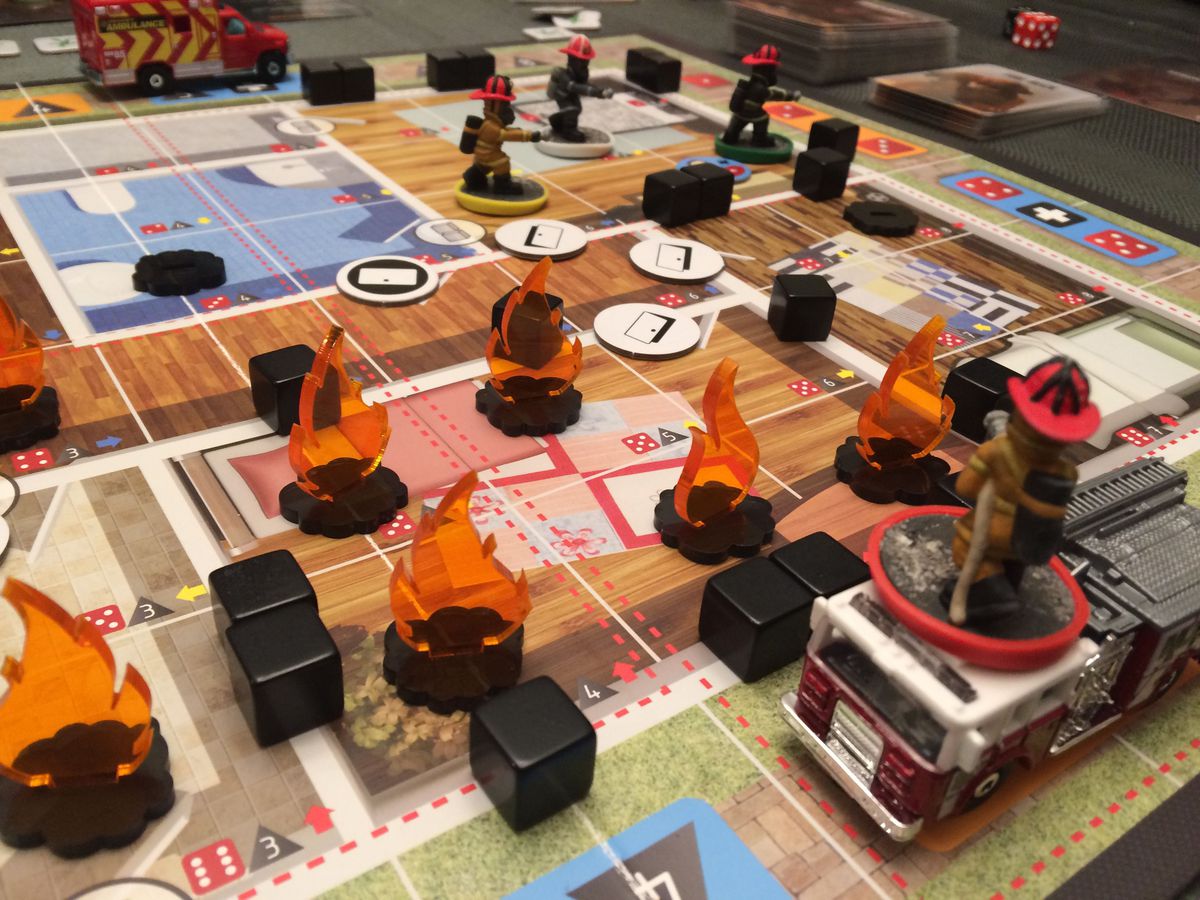 The instructions state the game is meant for 2 to 6 players, but playing solo is also possible – one just picks multiple characters.

On the other hand, inexperienced players will appreciate the simpler game variant (which makes it, in this aspect, a better choice than the great, but more difficult Ghost Stories), as well as the setting. Firefighters do have an universal appeal and seem to be everyone’s favourite heroes.[1] That’s an advantage in comparison to e.g. Yggdrasil; a lot of laymen would be put off by the unfamiliarity of the theme.

To sum up, Flash Point: Fire Rescue was a pleasant surprise, even though my first reaction to seeing the cover image was “I don’t know what this hideous thing is, but I don’t even want to find out.” I really liked that once you learn the rules, the game is pretty fast-paced, co-operative planning improves the teamwork, and provides relief when you’re tired of constant competition. It’s a great game that will disappoint neither newbies nor pros. Recommended.

Disclaimer: The most of this post is a translation from a my review originally published here.