How to buy (video)games cheaply

We live in a great time for gamers. Computers are powerful and games cheap, especially if one is patient enough. Here I’ll try to outline ways to get the most out of online distribution without spending a fortune. However, I’d like to emphasise that I’m really only talking about the games you buy and download online. If you insist on cumbersome paper boxes and annoying optical media, you can stop reading here.
If not, there are multiple sites, tools and services worth knowing.

Probably everyone knows Steam. It’s a digital distribution platform with a huge community and a wide selection of titles, also known for its sales with massive price cuts, sometimes up to 90% off. (Lord Gaben, praise be!)

Another one of my favourites is GOG. It’s a lot smaller than Steam, but it has some significant advantages; most importantly, the games don’t usually have any anti-piracy protection (or DRM) and don’t need online activation. Those are features that don’t stop the pirates and only bother people who actually paid up[1]. Moreover, there are a lot of cheap, classic games, modified so they run on modern computers. (GOG’s original name was “Good Old Games” and while its focus has shifted, it’s still a treasure trove of gaming history.)

An honourable mention goes to Desura that is, basically, Steam for smaller and indie games.

Seven for the price of one

Even with Steam’s 50+% price cut you can still get a better deal, thanks to a trend started by the Humble Bundle. Many more followed, including IndieGala or IndieGameStand, offering variations on the same premise: bundles of games, often offered on a “pay what you want” basis. Humble Bundle later broadened its portfolio and started selling bundles of e-books, comics, audiobooks or mobile games.

I buy most of my games in bundles such as these. Thanks to them, I’ve paid 1,5€ per game on average, which is often less than the price of a single beer. (And I live in Slovakia, where beer is often cheaper than tap water. :) ) We live in great times – games are so cheap that piracy just isn’t worth the trouble.

When you’re browsing a store, it’s always worth checking whether they offer any games for free. It’s a nice form of advertisement employed by GOG, Desura and Steam alike. The latter offers Alien Swarm, an excellent co-op action game, or Dota 2, a well-known MOBA, among many others.

Dota 2, however, is a “free-to-play” (F2P) game – that means you can play it for free, but it’ll try to persuade you to buy some supplementary bonuses, skins or add-ons. Another big players in the MOBA genre are League of Legends, or my current favourite, Heroes of the Storm. If you’d prefer an action RPG (i.e. in the style of Diablo or Torchlight, Path of Exile is worth a try.

One thing to look out for with F2P games is their business model. The games mentioned above are designed with fairness in mind, so even a non-paying player isn’t disadvantaged much (or at all). But there are games that are virtually unplayable if you don’t keep paying – hands off of them.

The above-mentioned “bundle” model also inspired The Free Bundle, that collects games that would be for free anyway, so you can just download and play.

How not to go broke

You can enjoy big discounts on a slew of titles and suddenly realize you’ve paid a lot more than you’ve intended. But that’s easily avoided with the help of some basic budgeting or appropriate tools.

The first thing to do is to set a specific sum as a ceiling. If, for instance, you don’t want to spend more than twenty euros, you can put all the games you’re interested in into your wishlist (or basket) and check how much they cost in total. Or, if you’re buying on Steam, you can put a twenty into your Steam Wallet and only use it to pay – that way you always know how much you’ve spent.

Of course, everything is better with the right tools.

EnhancedSteam is an excellent extension available for Firefox, Chrome and Opera. Install it and browse to the Steam pages. (That is, browse them via the browser like Firefox, not the installed Steam client.) It adds too much functionality to list here (the complete list is on their web), but I’d like to point out these two:

Aside from enabling various wishlist manipulations, EnhancedSteam will show the total cost of everything on your wishlist.

And for each game it also pulls info from various external databases – prices on different portals, whether they require a third-party DRM, what was the historically lowest price… 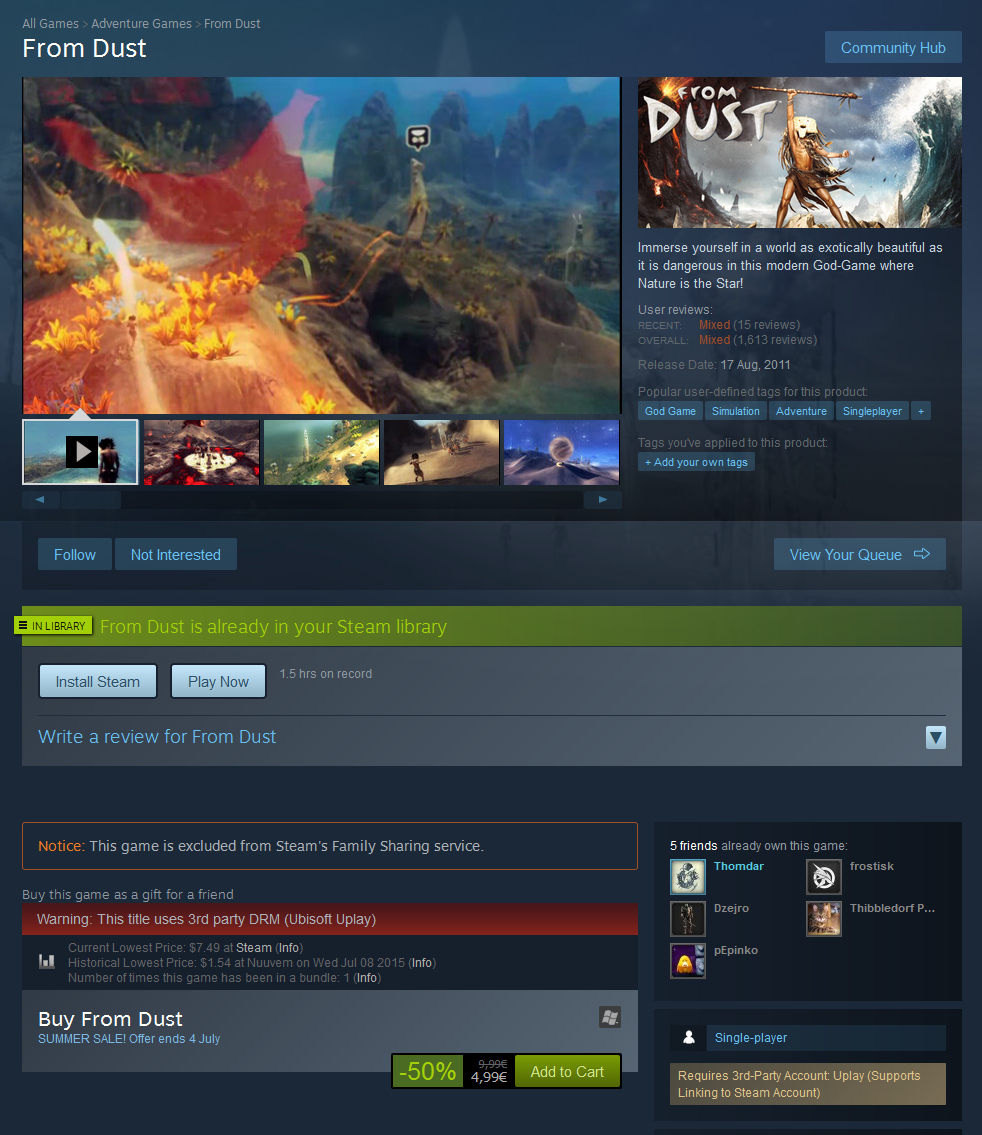 IsThereAnyDeal is a game database that tracks the current and historically lowest price of games in many online shops. If your desired game is too pricey at the moment, you can add it to a “waitlist”, specify how much you’re willing to pay, what shops we (don’t) want to use and whether we require Steam activation. IsThereAnyDeal will then notify you wen it detects a sufficient price drop.

Personally I like to buy bundles when there’s something interesting in them, and using IsThereAnyDeal + EnhancedSteam to buy anything specific I want for the lowest possible price.