I have been looking for an Evernote replacement for the longest time. It's a nice tool, but it has some features and limitations that irritated me: no markdown support (the HTML in the editor often got messy), no end-to-end encryption or control over my data, and a restrictive device limit and online-only requirement in the free version.
While one could argue I could have paid to fix some of those problems, I didn't want to. The only restriction that really bothered me was the two-device limit. I had no use for more space or extra features: in the 5+ years of using Evernote, I only accrued 200MB of data in it. And more than just a few times when I wrote a note offline on my phone, the app just discarded it: when I went back online, it was gone. So I kinda didn't want to give them any money on principle because of this BS.

I have eyed Laverna for maybe two years; it looked promising, even though I found some of the (technical) design decisons not to my taste. But there was one huge issue that went unfixed the entire time. While you could attach files to notes, they didn't sync. A link was simply created to the file in question, right on the device you added it on. The note was synced, but of course when it was downloaded to any other device, the link just pointed to an invalid location. WTF. I'd checked recently, and the issue still wasn't fixed.

I had tried Turtl and Simplenote and I don't know what else, but nothing suited me. Until I found Joplin[1] 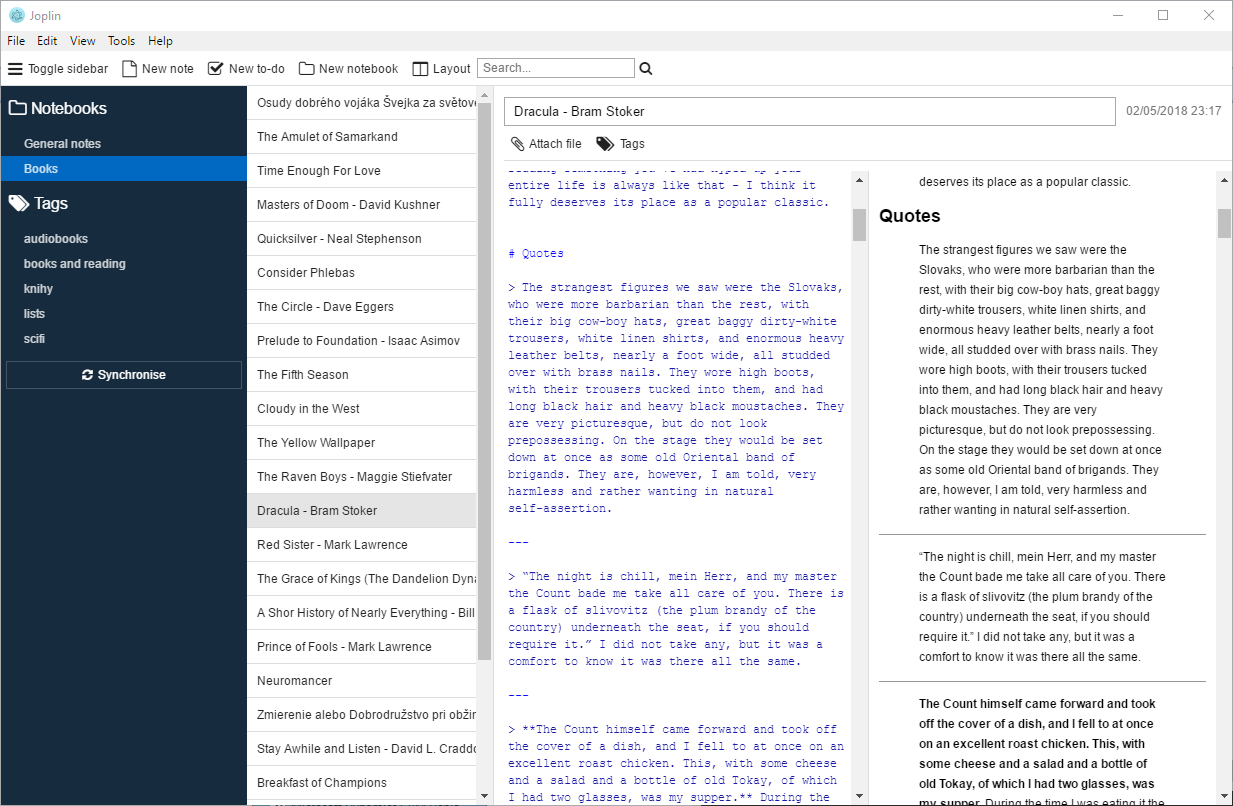 There's a lot to love: it can import from Evernote, supports Markdown, can work completely offline, can use various backends to sync your notes (e.g. DropBox, OneDrive, NextCloud), even supports end-to-end encryption so your notes are never in plaintext on the sync target. It has apps for all platforms, both PCs and mobile, and even a terminal client

The community is active and friendly: I've been using Joplin for less than two months and already many new features were implemented. There was no place to ask questions, so I opened a request on GitHub and shortly a new forum was opened.

So if you want to move away from Evernote, or if you're just looking for a great note-taking app, definitely give Joplin a try.

ps: Initially I'd only wanted to replace Evernote and still keep some other stuff in OneNote. But I've been experimenting a bit and it seems I might just ditch OneNote as well. We'll see: the migration isn't as straightforward there.