I’m no die-hard star wars enthusiast (and I’ve only seen two movies so far), but tiny death star looked too cute to pass up. I’m not a big fan of free-to-play games, but as long as they’re carefully designed, I don’t mind too much, either. 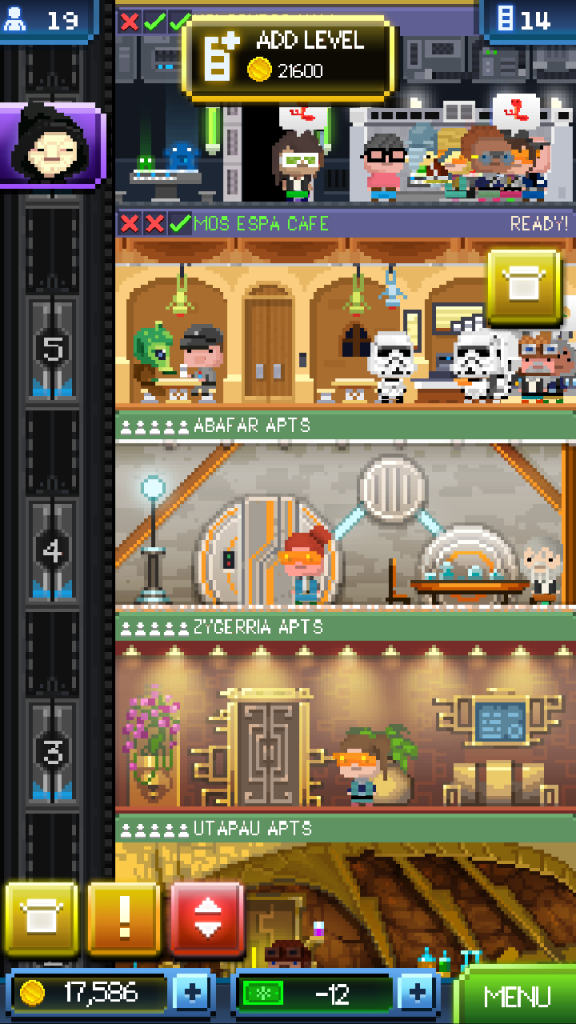 The first impression of the game was good. Funny introductory dialogue, cute pixelated graphics, along with the realization that this is probably exactly what people feared Disney would do with the franchise, were all appealing. Following the tutorial instructions I quickly realized this is going to be a Tamagotchi game. The player has to build the death star, level by level, using existing levels to house people and run shops in order to make more money to build more levels. During the first day of playing, I even considered spending a bit.

And that’s when the first doubts surfaced. Too many aspects of the game looked like they wanted me to start spending money ASAP. Everything takes an eternity to complete. The elevators are slow and useless. But you can pay to speed it up a bit! Don’t want to wait until a shop orders stock? Don’t want to hold the elevator button for half a minute to earn 20 coins (of the 100,000 needed for the next level)? Want to sell the goods quick, or hire a random person? Build a level immediately, instead of waiting 20 real-time hours? Just spend a bit of cash.

But besides spending money, there isn’t a whole lot of other things to do. The gameplay consists of tapping all the levels with positive numbers three times, and all the levels with negative ones five times. That’s it, there’s no strategy or any real prioritization or anything.

You could also do one of three kinds of quests. In the negative numbered (i.e. “Imperial”) levels you can fulfill tasks like “create a battle tactics” or “pull in some stuff using your tractor beam”. They are completed via tapping the negative levels five times, spending a 1,000 coins and waiting a bit. And just when I thought that this is at least a bit less of a drudgery than the other level-tapping, this happened: 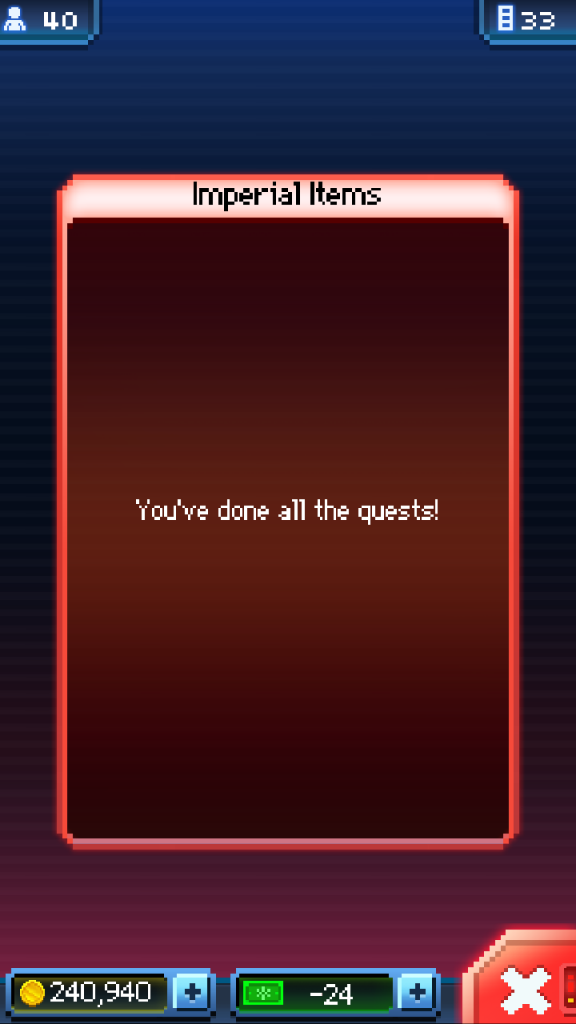 The second kind of quest are given by the Emperor and are supposed to advance your Death Star. You would be financially rewarded for building more levels or housing more people, if they weren’t buggy as hell. Often the victory condition didn’t trigger when it should, and that’s why I never even got past this one. 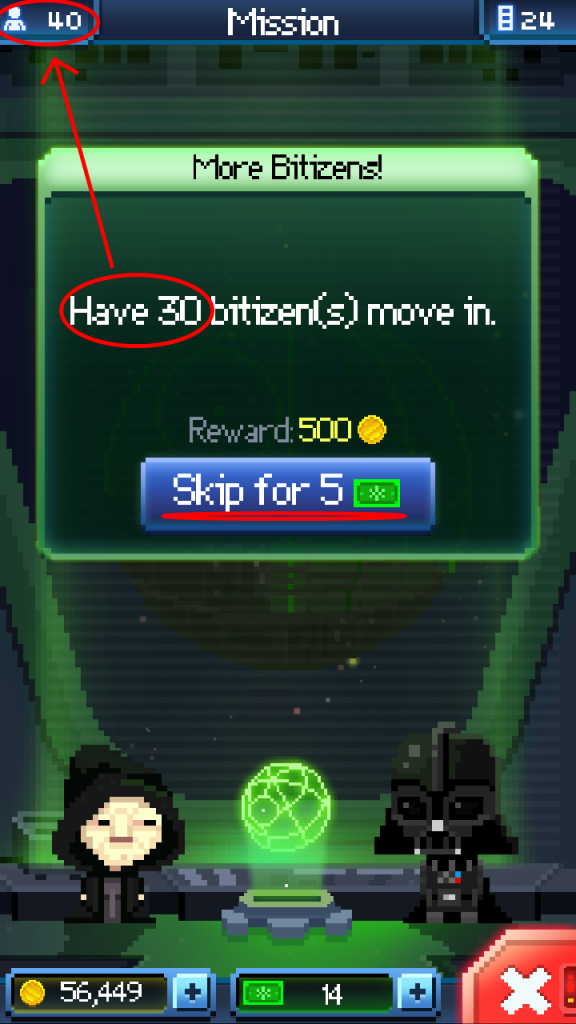 The last kind of quest is the simplest. At random, you are asked to help find a citizen, so you go around and tap levels, until you tap the one he has spawned in. This was nice at first, but would be boring slow scrolling through 20+ levels. Luckily this is also pointless, since the reward for doing this is 1 BUX, the current number of which is shown next to the green bank note. BUX is the currency you buy with real money and pay for skipping boring parts. As you can see, the number in many of my screenshots is negative more often than not. That is because on at least two separate occasions, the game simply subtracted 45 – 60 BUX at random.

Let me say this again, because it can’t be overstated: the game lets you buy BUX for real money, and then simply deletes them at random.

Needless to say, I’m really glad I didn’t spend anything on that first day.I have tried complaining to the developer and noticed that a lot more people encountered this bug and the developer simply left it without a comment.

Compared to this massive screwup, the sound bugs (sound playing when it should be turned off) and glitchy graphics hardly count at all. 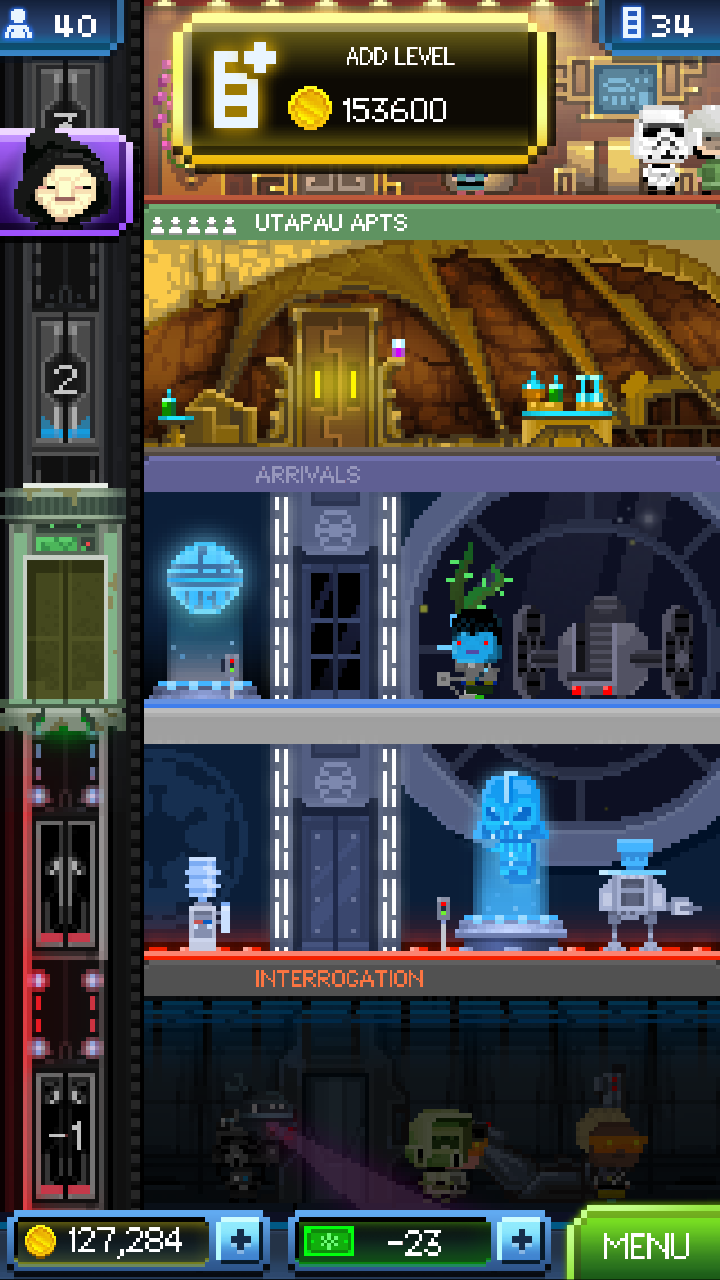 The levels above "Arrivals" are for shops and housing; those below are for imperial torture and suchlike. 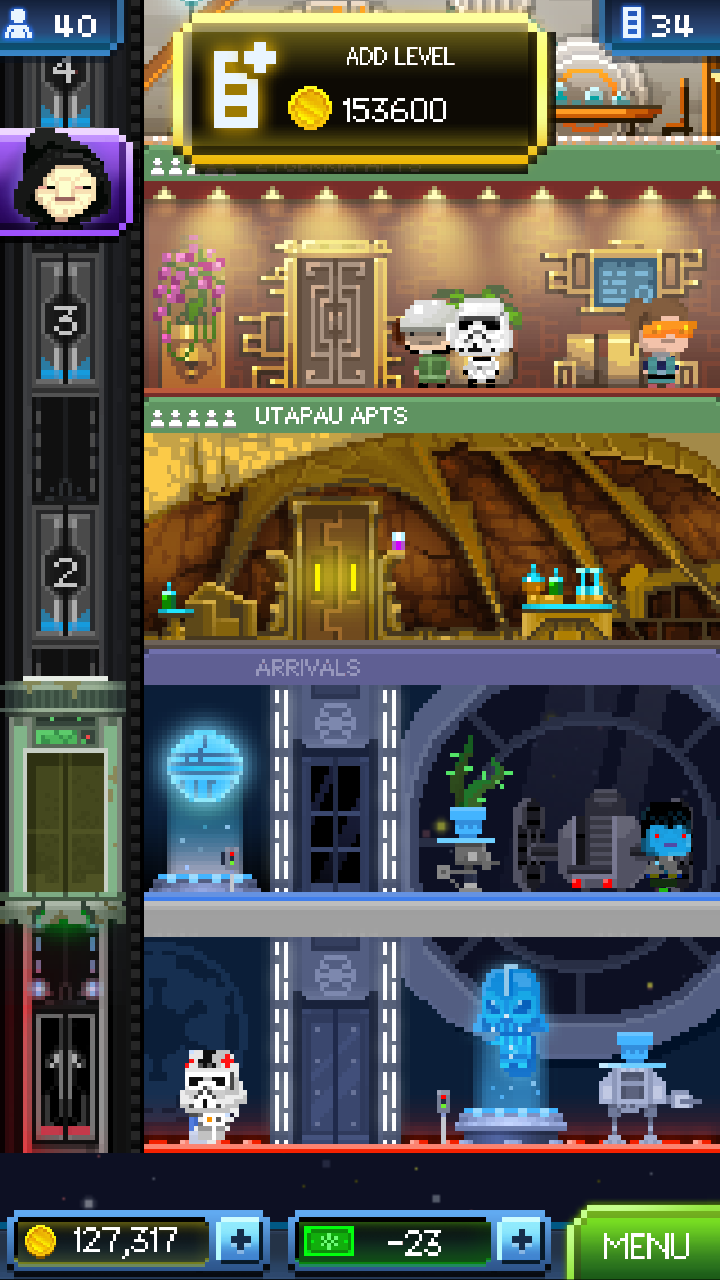 Graphic glitches at work. Notice the missing floor at the bottom, shown in the previous image. 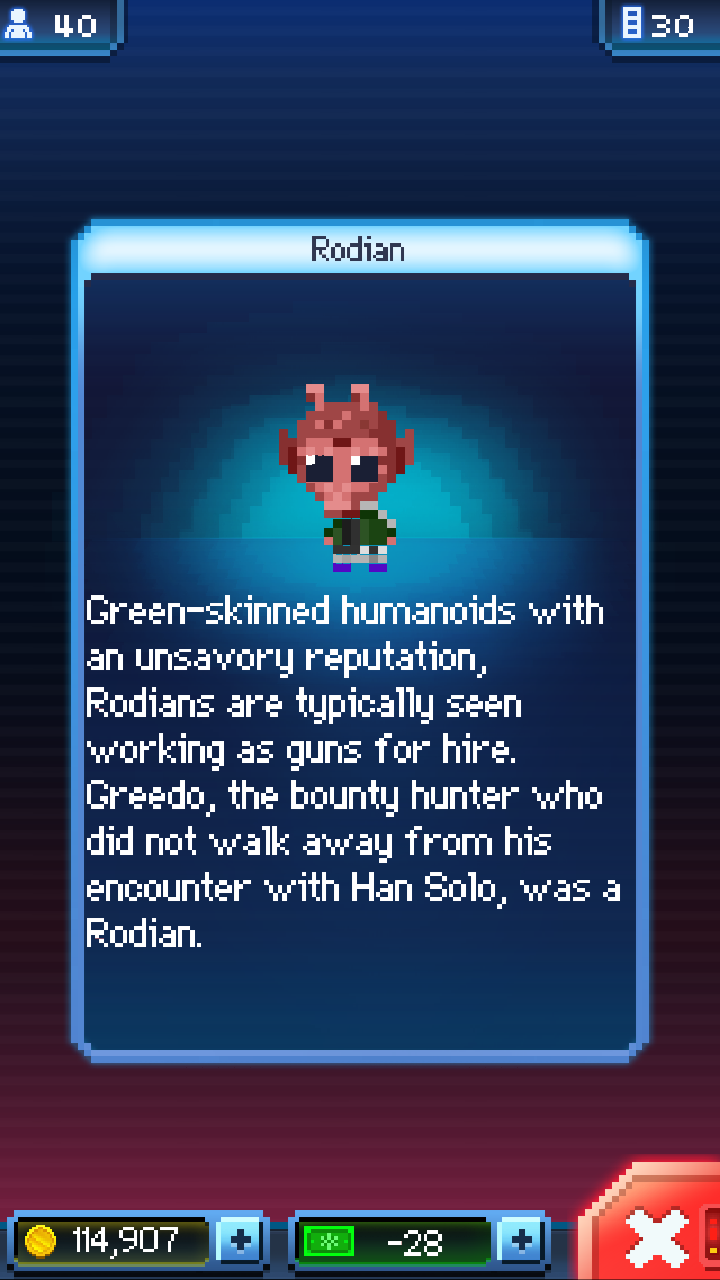 The bottom line is, this game’s outrageous bugs overshadow even the fact that “playing” it is a dull, pointless chore.